Cyprus in the Long Late Antiquity

History and Archaeology between the 6th and the 8th centuries 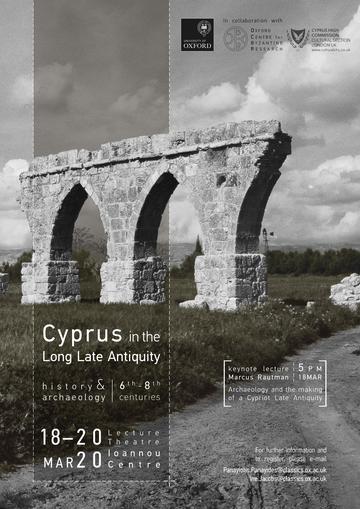 Poster Background Photo: Remains of the aqueduct of Salamis-Constantia, 1st half of the 7th century ©️ Department of Antiquities, Cyprus (neg. no. D2608)

Cyprus in Late Antiquity was a thriving and densely populated province. During the sixth and seventh centuries, the growing affluence of the island is conspicuous in comparison to other regions of the Eastern Roman Empire. In the traditional historical view, the late antique period on Cyprus ended abruptly as a result of the Arab raids of the mid-seventh century. The original focus of urban archaeology on monumental structures and Christian basilicas tended to stress the impact of these raids further; layers of destruction were often uncritically associated with the Arabs, overshadowing archaeological evidence that hinted at continuities beyond the mid-seventh century.

In recent decades, archaeological research on late antique Cyprus has shifted its focus away from urban centres and single monuments in favour of a more contextual perspective. Building on well-established traditions of field prospection, diachronic survey projects and small-scale excavations are revealing a complex web of settlement patterns. They have shown that economic, political and cultural contacts between the island and the wider eastern Mediterranean were continued. Moreover, they also suggest that the end or transformation of occupation on individual sites cannot always be explained by catastrophic events, but should be interpreted in terms of local adaptation to changing needs and contacts.

This symposium brings together archaeologists and historians engaged in the study of Cyprus between the sixth and eighth centuries. They will collate the results of recent and past research to arrive at a comprehensive, interdisciplinary reconstruction of life on the island in the Long Late Antiquity.

For further information and to register your attendance, please contact the organisers.