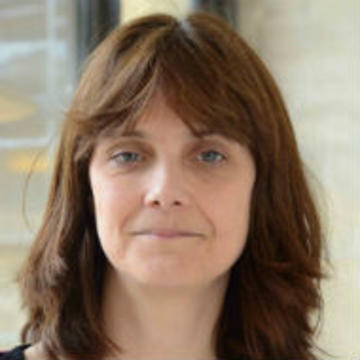 Many congratulations to Catherine Holmes, A.D.M. Cox Old Members’ Tutorial Fellow in Medieval History at University College, who has been made a Professor of Medieval History in the University's Recognition of Distinction awards. The OCBR is thrilled that Catherine's contribution to Medieval and Byzantine scholarship has been recognised with this prestigious accolade.

Catherine's research seeks to integrate her interests in Byzantium with the study of the history and culture of other regions of the medieval world. Her early research focussed on the history and culture of Byzantium in the tenth and eleventh centuries; this culminated in a monograph treatment of the reign of Basil II: Basil II and the Governance of Empire, 976-1025 (Oxford, 2005). Subsequently, her interests moved on to the wider eastern Mediterranean world of the later medieval centuries (13th to 15th), investigations which often focused on the relationship between politics and religious identity. In 2012 she published a co-edited volume with Jonathan Harris and Eugenia Russell: Byzantines, Latins and Turks in the Eastern Mediterranean World (Oxford, 2012). Thinking about how to understand the connections within the medieval Mediterranean led Catherine towards global history. Together with Naomi Standen (Professor of Medieval History at Birmingham and a historian of medieval east Asia), she convened large network of scholars in an AHRC-funded network project called ‘Defining the Global Middle Ages’ (2012-15), an initiative which was published in 2018 as a collection of essays: The Global Middle Ages, Past and Present Supplement 13 (Oxford), Catherine isalso involved in another collaborative cross-cultural project which examines political culture in the medieval West, Byzantium and the Islamic world, and is due to be published in 2021 by Cambridge University Press: Political Culture in the Latin West, Byzantium and the Islamic World c. 700–c. 1500: A Framework for Comparing Three Spheres, (eds.) CH, Jonathan Shepard, Jo Van Steenbergen and Björn Weiler. This project ties in with her longstanding interest in the intersections between politics, literary culture and communication (CH and Judith Waring (eds.), Literacy, Education and Manuscript Transmission in Byzantium and Beyond (Leiden, 2002). ISince 2011, Catherine has also been one of the editors of The English Historical Review.

Catherine lectures and offers tutorial teaching in  a wide range of the survey courses and specialist options in medieval history within Oxford’s Faculty of History. These include a variety of Europe and World History papers, as well as options on the Mongols, the Crusades, and ‘Byzantium in the Age of Constantine Porphyrogenitus’. She supervises theses and essay topics regularly for the master’s courses in Late Antique and Byzantine Studies, Medieval History, and Medieval Studies, as well as a master’s level option in ‘The Global Middle Ages’. She supervises doctoral students in the fields of Byzantine political and cultural history (after 850 C.E.) and Mediterranean cultural and political history from the tenth to the fourteenth centuries (with a particular focus on the eastern Mediterranean).