The famous stately home Holkham Hall in Norfolk houses a renowned library built up mainly between 1712 and 1718 by Thomas Coke, later first Earl of Leicester. During his Grand Tour of Europe Coke acquired over 700 manuscripts, most of which – with texts in Latin, French, German – remain there. However, 117 of the 118 which are in Greek came to the Bodleian Library in Oxford as a result of transactions in 1954, 1956 and 1981. They range in date from the 10th to the 17th century and include patristic and Byzantine material as well as a few classical texts. Some of Coke’s Greek manuscripts derive from the collection of Andreas Erasmus Seidel (Berlin, 1718), a consular official in the Aegean, but the majority came in 1721 from the library of Giulio Giustinani, a Procurator of San Marco, Venice. The Giustinani codices are the last remnants of the library formed by three generations of a family of Orthodox priests in Crete, which was dispersed when the island fell to the Turks in 1669. A useful but terse hand list was published by Ruth Barbour in 1954: ‘Summary description of the Greek manuscripts from the library at Holkham Hall’, Bodleian Library Record 6, no. 5, 591-613. While this has made the manuscripts’ contents known in outline it has, however, concealed as much as it has revealed.

Since 2015 Dr Dimitrios Skrekas has been working part-time to produce a catalogue that meets current standards and is gradually becoming freely available on the Bodleian Library’s web-site in its electronic catalogue of medieval manuscripts.

This new catalogue conforms to up-to-date bibliographic standards with use of TEI and xml mark up. The aim is to provide full paleographical and codicological descriptions of each manuscript with particular attention is paid to marginalia and colophons, which are presented in diplomatic transcription. Although for practical reasons it is not possible at this stage to digitize the manuscripts, the creation of this catalogue will facilitate digitisation in the future. The catalogue will be completed in the course of 2020. Dr Skrekas’ work has been made possible by generous and interested support from numerous institutional benefactors: the A.G Leventis Foundation, the Oxford Centre for Byzantine Research, the Michael Marks Charitable Foundation, the Yerolemou Charitable Trust, the Greek Orthodox Education Trust of St Nicholas, the Gerald Palmer Eling Trust and the Lazari Foundation. Administrative support is provided by the Faculty of Medieval and Modern Languages. Elizabeth Jeffreys, who has general oversight of the project, and Dimitrios Skrekas are grateful for advice, help and support from Martin Kaufmann and Matthew Holford (Bodleian Library) and also Nigel G. Wilson (Oxford), Maria Kalligerou (Oxford), Charalambos Dendrinos (London), Maria Argyrou (Athens), Eleni Kakoulidou-Panou (Athens), Annaclara Cataldi-Palau (Switzerland), Stephanos Kaklamanis (Athens), Dorotei Getov (Sofia), Dimitrios Zaganas (Brussels).

Publications and papers related to the project:

D. Skrekas, ‘The prestige of manuscripts: from Venetian Crete to Holkham Hall and beyond: a descriptive online catalogue of the Greek manuscripts from Holkham Hall now in the Bodleian Library’, in Greek Manuscript Cataloguing: Past, Present, and Future, eds P. Degni, P. Eleuteri, M. Maniaci, Bibliologia 48, 2018, pp. 167-175.

D. Skrekas, ‘The Homily in honour of St. Dimitrios from the Collection of Homilies in MS. Holkham Gr. 54 (BHG 547j)’ (paper delivered at the Parekbolai Symposium, University of Thessaloniki, December 2018).

D. Skrekas, ‘The prestige of manuscripts: from Venetian Crete to Holkham Hall and beyond: a descriptive online catalogue of the Greek manuscripts from Holkham Hall now in the Bodleian Library’ (poster, in the XXIIIrd International Congress of Byzantine Studies in Belgrade, 2016). 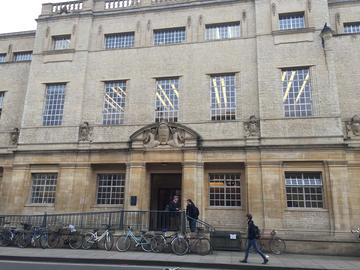 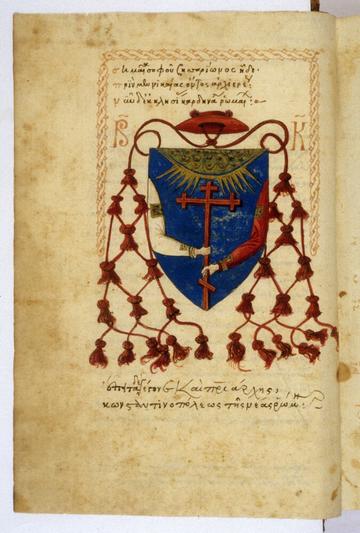 MS Holkham gr. 79, fol. 4v: the coat of arms of Cardinal Bessarion. This 15C manuscript contains works, including some of Bessarion’s, relating to the Union of the Churches. Photo: © Bodleian Libraries, University of Oxford