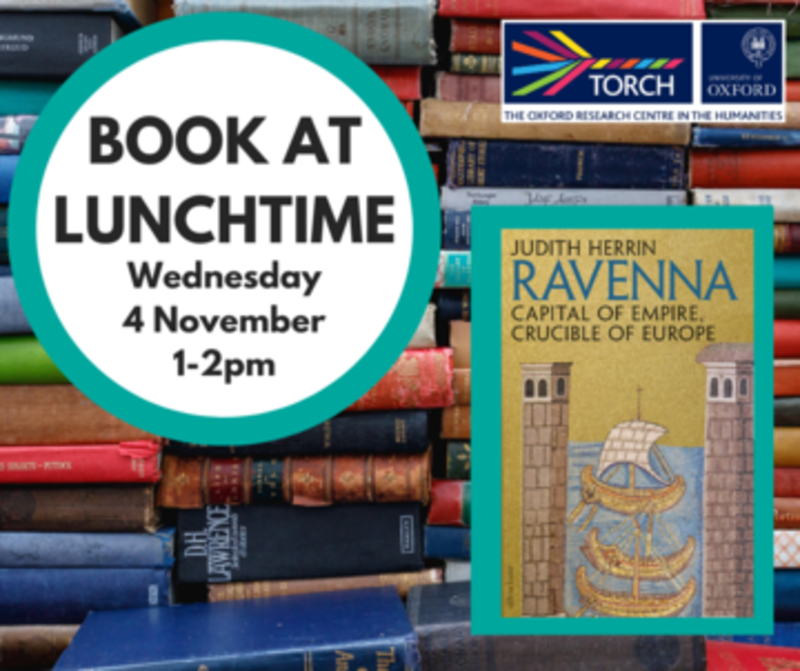 Join us for an online TORCH Book at Lunchtime webinar on Ravenna: Capital of Empire, Crucible of Europe written by Professor Judith Herrin.

Book at Lunchtime is a series of bite-sized book discussions held weekly during term-time, with commentators from a range of disciplines. The events are free to attend and open to all.

Click here to register. Prior to the event you will be sent the link to join the discussion.

From 402 AD until 751 AD, Ravenna was first the capital of the Western Roman Empire, then that of the immense kingdom of Theoderic the Goth and finally the centre of Byzantine power in Italy. In Ravenna: Capital of Empire, Crucible of Europe, Judith Herrin explains how scholars, lawyers, doctors, craftsmen, cosmologists and religious luminaries were drawn to Ravenna where they created a cultural and political capital that dominated northern Italy and the Adriatic. As she traces the lives of Ravenna's rulers, chroniclers and inhabitants, Herrin shows how the city became the meeting place of Greek, Latin, Christian and barbarian cultures and the pivot between East and West. The book offers a fresh account of the waning of Rome, the Gothic and Lombard invasions, the rise of Islam and the devastating divisions within Christianity. It argues that the fifth to eighth centuries should not be perceived as a time of decline from antiquity but rather, thanks to Byzantium, as one of great creativity - the period of 'Early Christendom'. These were the formative centuries of Europe.

Author Judith Herrin won the Heineken Prize for History (the 'Dutch Nobel Prize') in 2016 for her pioneering work on the early Medieval Mediterranean world, especially the role of Byzantium, the influence of Islam and the significance of women. She is the author of Byzantium: The Surprising Life of a Medieval Empire, The Formation of Christendom, A Medieval Miscellany and Women in Purple. Herrin worked in Birmingham, Paris, Munich, Istanbul and Princeton before becoming Professor of Late Antique and Byzantine Studies at King's College London until 2008, where she is now the Constantine Leventis Visiting Senior Research Fellow in the Department of Classics.

Peter Frankopan is Professor of Global History at Oxford University, where he is also Senior Research Fellow at Worcester College and Stavros Niarchos Foundation Director of the Oxford Centre for Byzantine Research. He works on the history of the Mediterranean, Russia, the Middle East, Persia/Iran, Central Asia and beyond, and on relations between Christianity and Islam. His books The Silk Roads (2015) and The New Silk Roads (2018) received huge acclaim. He writes regularly for the international press, advises governments on geopolitics, and is chair of this year’s Cundill History Prize.

Professor Dame Averil Cameron was Warden of Keble College, Oxford from 1994-2010, and before that Professor of Late Antique and Byzantine History at King's College London where she was also the first Director of the Centre for Hellenic Studies. She has been President of CBRL (Council for British Research in the Levant) and FIEC (Fédération internationale des associations d'études classiques) and is currently President of the Society for the Promotion of Byzantine Studies.

Dr Conrad Leyser is Associate Professor of History at Oxford and a Fellow and Tutor of History at Worcester College. He specialises in the religious and social history of the Latin West in late Antiquity and the early Middle Ages (300-1100). His current research project centres on celibacy and the professionalisation of the priesthood in the so-called 'unreformed' Church of the tenth century. He is the author of Authority and Asceticism from Augustine to Gregory the Great and the co-editor of England and the Continent in the Tenth Century.